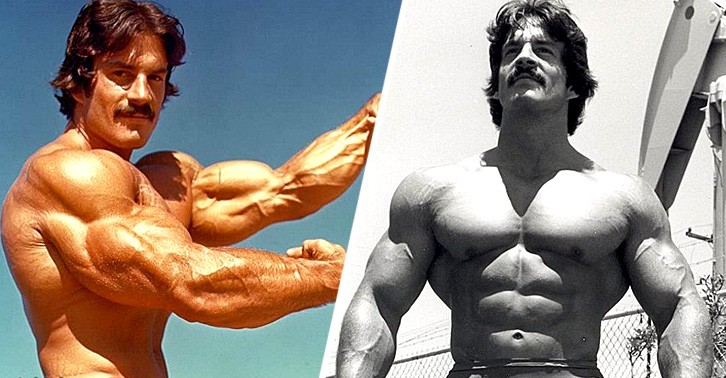 He stood only 5’8′ yet packed 215 pounds of rock-solid muscle on his frame. His triceps, in particular, when viewed from behind, reminded one of two large watermelons hanging out of a T-shirt. Reports varied as to the actual size of his arms. When Mike Mentzer was asked how big they were at one of his seminars, he responded with characteristic wryness, ‘Very big.’

The Role of Genetics

Without question genetics played a huge role in providing the foundation for the muscular mass that Mike built as he was the first to admit. In later years, however, he confided that he had reservations about making such a strong case for genetics. While genetic characteristics were important, Mike believed that they had been overemphasised. He worried that the notion that you have to have good genetics to achieve a championship physique had actually served to destroy the motivation of certain bodybuilders. ‘Besides,’ Mike explained, ‘it’s very difficult to accurately assess your genetic potential. At best you might be able to get a suggestion of where you might go based on your muscle belly lengths, your bone structure and metabolism and neuromuscular efficiency, but the most important thing, I think, is motivation’everyone can improve themselves, and that’s important. Not everyone is going to become Mr. Olympia, but we can all improve ourselves.’

In 1986 John Little (co-author with Mike Mentzer of High Intensity Training The Mike Mentzer Way) was living in Canada and searching for answers concerning the ‘ultimate truth’ of bodybuilding. He interviewed many of the top bodybuilders of the time – Lou Ferrigno, John Grimek, Paul Anderson, Doug Hepburn, Frank Zane, Lee Haney, Dorian Yates, Lee Labrada, Steve Reeves and of course Mike Mentzer. But it was Mentzer’s unique training structure that stood out to him the most. Mentzer had followed a great number of training systems throughout his career but foremost on John Little’s agenda was finding out what Mike Mentzer’s most productive training routine had been.

Early in Mentzer’s career, When his gains had ground to a complete halt on high-set routines, he happened to make the acquaintance of Casey Viator, then the youngest person ever to hold the Mr. America title, and learned of the high-intensity-training principles advocated by Nautilus creator Arthur Jones. After speaking with Jones directly, Mike decided to switch back to a three-days-per-week whole-body routine, performing approximately five sets per bodypart in high-intensity fashion. He won the ’76 Mr. America contest at a bodyweight of 205 pounds while training on such a program, but he didn’t stay with it, switching eventually to a split routine performed four days per week. Then, prior to his Mr. Olympia appearances in 1979 and ’80’where he tipped the scales at a rock-solid 215 pounds’he spread out his routine even further, training only once every two to four days.

Durning his interview with John Little, Mentzer opened up in great detail about the routine that earned him the famous physique we know today.

“The routine I followed was the essential basic Heavy Duty routine consisting of four to five sets per bodypart and broken into two workouts – The first workout would be legs, chest and triceps; the second workout was back, shoulders and biceps.”

” I always selected weights for my exercises that allowed me to get at least six good positive repetitions and then continue with forced and negative reps. With any preexhaust set, such as leg extensions to leg presses or pec deck to incline presses, I would take no rest at all between exercises, but I would rest long enough to catch my breath, and I’d only do the negatives once a week on each exercise.”

“I used this type of routine throughout my professional bodybuilding career, but the greatest gains I got from it was when, rather than following it on the usual four-out-of-seven-day schedule, I began spacing it so I trained every other day on a split routine. ‘For instance, rather than train Monday and Tuesday on a split routine, working half the body on Monday and the other half on Tuesday’I would do the first half of the body on Monday, skip Tuesday to recuperate and then train on Wednesday, rest on Thursday and repeat the cycle again, starting on Friday. That was the most result-producing routine that I ever used.”

Putting It Into Practise

“it was back in 1979. I remember meeting my brother in the gym for one of our usual workouts. I think it was the second day of a split-routine schedule, and we were both quite fatigued, apparently still not having recovered from the previous day’s workout. All of a sudden it occurred to me that it would be useless to train with anything less than all-out intensity’since that was required to induce maximum growth stimulation. And if, in fact, I had not recovered’and it was obvious to myself and my brother that we had not recovered, as we were both extremely tired’why train at all?”

“Recovery always precedes growth, and growth was our ultimate goal. If we had not recovered, then, in fact, there was no way we could have grown from the first workout. In that kind of a case the best thing that can happen would be that you merely wouldn’t make any progress; you’d just spin your wheels. But carried on for too long, that kind of effort actually causes you to lose muscular mass and strength’you’ll always be making inroads into your recovery ability and never allowing yourself to recover, let alone grow, which is secondary.”

“You have to recover before you can grow, So, we figured, why work out again? We had to recover first. And there were times when we skipped even two days in between workouts’72 hours. We’d train on a Monday, then skip Tuesday, skip Wednesday and train Thursday. We’d do that because we’d meet on Wednesday morning or discuss it Tuesday night, and it was obvious that we were still tired, that the forced reps and the negatives we’d done on Monday with our leg and the chest work, for instance, were so exhausting that we hadn’t overcome the effects of the workout. How the hell were we going to grow unless we at least let that happen? We knew that recovery was important in terms of overall, or systemic, recovery. We weren’t worried about localised recovery of a particular muscle. We knew that happened relatively quickly after a workout. But it was obvious that due to our general exhaustion we hadn’t even recovered our overall systems’ energies and so forth’let alone grown. And since growth was our primary goal along with getting defined, at that point we realised that it would have been counterproductive’perhaps even harmful’to our progress to have trained before we allowed recovery and growth to take place.”

“The formula is: brief training, intense training, infrequent training,’ he said. “Young bodybuilders reading this should be cautioned against doing too many sets on too many days for all bodyparts. Their enthusiasm is often a hindrance; they’re so willing and able to train marathon-style to acquire a muscular physique that they often overtrain. I train in Gold’s when I do train and I see this as probably the most pervasive mistake among bodybuilders, including advanced bodybuilders. I would just suggest that no matter what methods you use, you don’t do more than four to six sets per bodypart, use strict form, train to failure, use forced reps occasionally and don’t overtrain. That is, don’t train so frequently so that you exceed your body’s ability to overcome the exhaustive effects of exercise and don’t have enough recovery ability left over for growth.”