When you’re ready to bring the noise, want clinically dosed ingredients and you’re looking to initiate Total War in the gym, this is the pre-workout you want in your arsenal.

When you’re ready to bring the noise, want clinically dosed ingredients and you’re looking to initiate Total War in the gym, this is the pre-workout you want in your arsenal. With close to 13g of active ingredients per scoop, Total War brings the pain when it comes to maximum dosed ingredients for maximum performance.

Total War’s combination of powerful stimulants, nootropics and maximally dosed nitric oxide compounds makes it one of the top tier pre-workout supplements on the market. With an unrivalled ingredient panel, which is completely transparent, Total War will get you to the highest level of readiness you will ever experience.

Citrulline Malate has been clinically researched to enhance strength, power and repeat high-intensity sprint performance in those supplementing with 4-8g prior to an exercise bout. Once consumed, Citrulline Malate bypasses is utilised to increase Arginine levels, leading to bigger pumps, but also enhances the production of energy known as ATP, which is responsible for increasing performance.

Beta Alanine is one of two amino acids responsible for increasing intramuscular Carnosine levels, which has been shown to outperform all of its counterparts at increasing the speed of lactic acid removal. Supplementing with Beta Alanine enhances endurance as well as high-intensity performance and may also benefit recovery in between sets for those using it to enhance performance in the gym.

Combining two types of caffeine for a total of 350mg per serve, Total War is both a high stimulant and a high nutrient pre workout. Caffeine stimulates the release of the catecholamine’s Adrenaline and Noradrenaline, which provide mental energy, and has been linked to directly increasing both strength and endurance performance when consumed pre-workout.

The Juniperus Berry extract provides a steady stream of energy and has been linked to improving the release of unwanted fluid retention in some individuals carrying additional water weight.

Supplementing with Naringin, which is a citrus flavonoid derived from the grapefruit, has been shown to improve blood glucose control via a perceived improvement of insulin regulation. 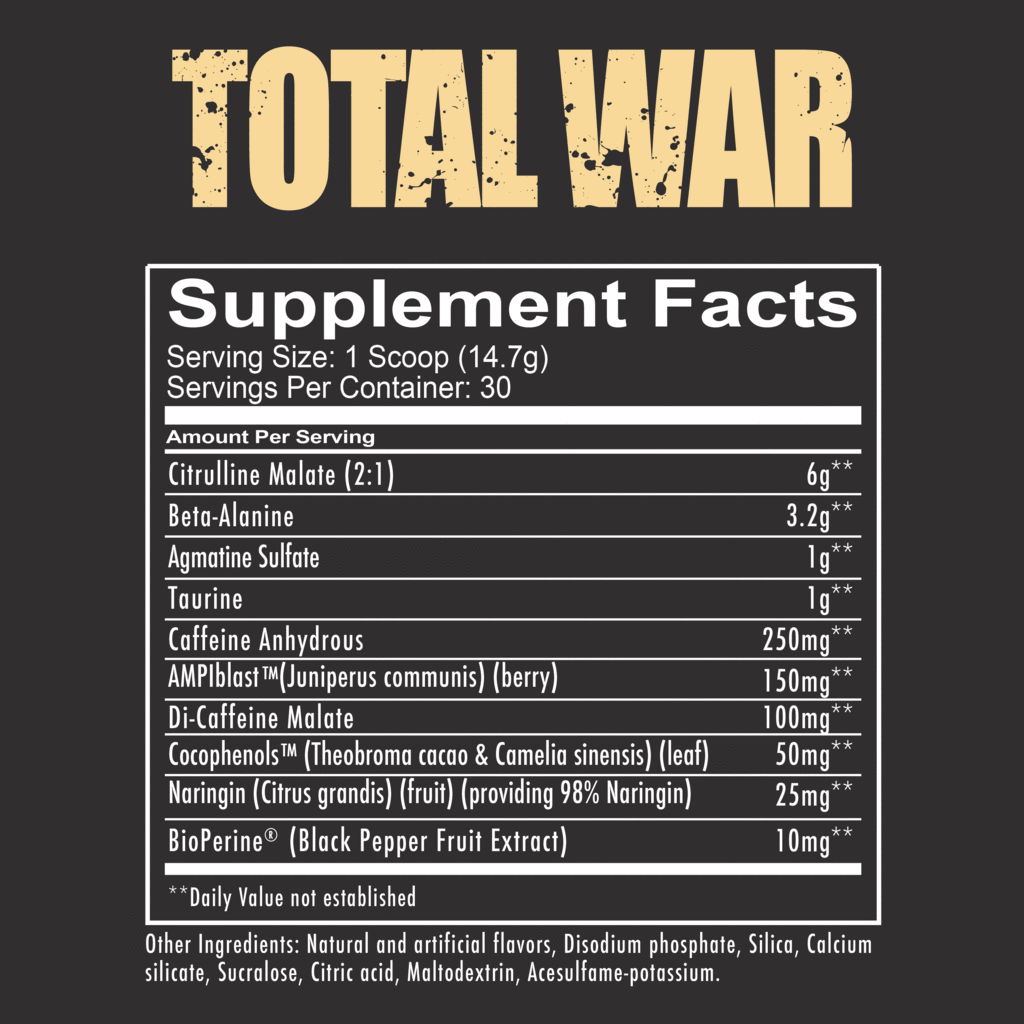 Be the first to review “Total War – Redcon1” Cancel reply