Lipodrine is a cutting edge high energy thermogenic fat burning capsule. An enormous amount fo research has gone into developing this block buster weight loss solution. This combination of Stimulant based and thermogenic ingredients has now become renowned as the strongest fat burner currently on the market.

This incredible thermogenic capsule – Lipodrine, made by one of Australia’s most trusted brands (Growth Labs Australia) will definitely not disappoint.

The separate compounds contained in Lipodrine alone are enough to get excited about, but when used in combination they perfectly mesh to create a high energy, high impact, single serve thermogenic capsule that truly delivers the goods.

Growth labs’ focus on a combination of  lipolysis and stimulant inducing ingredients in this super capsule have shown to be a knockout punch for its users.

Lipolysis is the breakdown of lipids and involves hydrolysis of triglycerides into glycerol and free fatty acids. Predominantly occurring in adipose tissue, lipolysis is used to mobilise stored sbody fat and use it as energy. That’s great news for users of Lipodrine! Who doesn’t want to be using up body fat stores for energy?

On the other side of the equation we have the Stimulant properties of Lipodrine. Thats right that mega energy surge we all love! The stimulant compounds contained within Lipodrine, are specifically designed stimulate the brain and central nervous system. Stimulants induce alertness, elevated mood, wakefulness, increase motor activity and decrease appetite. 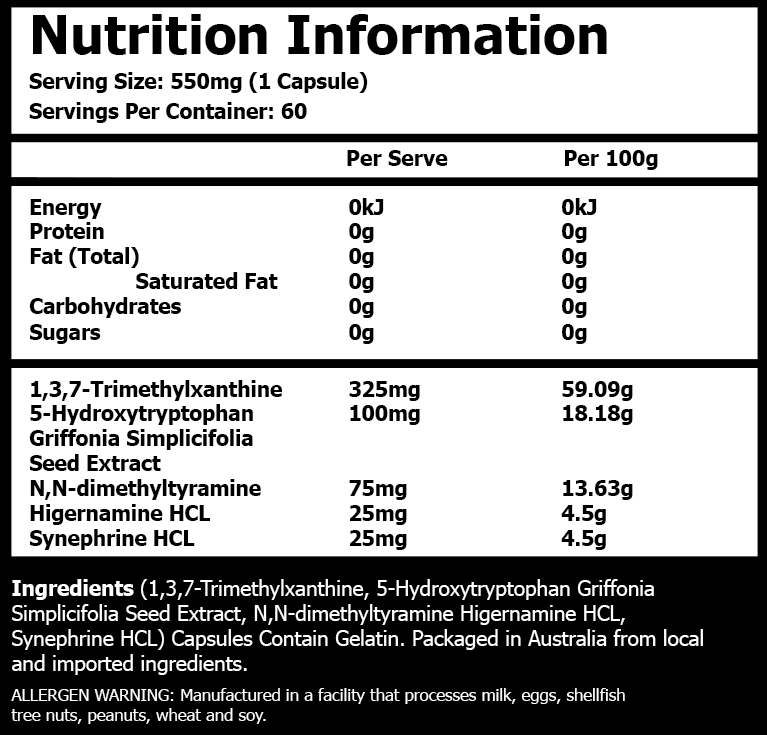 Growth Labs Australia has included 1,3,7-Trimethylxanthine which is a central nervous system stimulant that reduces fatigue and drowsiness, in addition to improving reaction time, wakefulness, concentration, and motor coordination.

5-Hydroxytryptophan is a necessary precursor for the brain to produce more serotonin. It is a key inclusion in Lipodrine.

higenamine has been included in lipodrine because it is showing amazing results as a pre-workout supplement for improving athletic performance. As an added bonus it has also been shown to be effective for weight loss, cough, asthma, and erectile dysfunction.