Primabolics Grind is one of the most comprehensive, stand alone, muscle pump catalyst on the market today! It is not merely a pump additive. It is not just a product for night trainers and shift workers and those who don’t like caffeine.

Primabolics Grind is one of the most comprehensive, stand alone, muscle pump catalysts on the market today! It is not merely a pump additive. It is not just a product for night trainers and shift workers and those who don’t like caffeine.

This is Performance Fuel for serious athletes only, who can either enjoy the benefits of a stim free pre workout by itself or stack with their favourite products of choice for training to take their training to the next level! So let’s have a look at what makes Primabolics Grind so special! With a whopping 20 gram serving size, it combines industry leading innovation in Vasodialation, combined with premium quality active ingredients to promote endurance, power out put and buffer lactic acid!

Starting with the pump complex, we see VASO6, which at 300mg is proven to increase nitric oxide up to 10 time more than a single 7,000mg dose of L-Arginine! Stack this with 6,000mg Citrulline Malate (2:1) which is proven to increase reps to fatigue and drastically increase Nitric Oxide production, further increasing muscle pumps. Finally throw in a mega dose at 500mg of Potassium Nitrate, an electrolyte bonded Nitrate carrier which will by itself, also create a savage pump in the weight room! Throw the 3 together and you have a pump that actually hurts! Endurance and power The king of muscular endurance is CREATINE with nearly 30 research indicating its benefits for power, endurance and muscle building. At 5,000mg Primabolics Grind has a full clinical dose of Creatine Monohydrate to afford you these benefits during intense training. This works synergistically with BETAINE ANHYDROUS at 2000mg, which acts as a methyl donor to convert Cysteine to Methionine which is crucial in the Kreb Cycle to produce ATP, again synergistically working with Creatine which acts as a Phosphate donor to the ATP production cycle. In studies, a dose of 2.5g of Betaine used twice a day showed increases of 25% in 4 weeks! Finally combine these two with 3,200mg of BETA ALANINE for increasing muscle Carnosine levels and buffering lactic acid and you have a product with unrivalled endurance made custom for your athletic pursuits!

The final element to Primabolics Grind is the addition of a synergistic nootropic complex. Firstly, a mega 1,000mg dose of L-Tyrosine boosts Dopamine production, leading to positive mood and increased focus for hours post consumption. This will also work synergistically with stimulant containing pre workouts which stimulate similar catecholamines. Next we have trademarked ALPHASIZE ALPHA GPC at 300mg to boost Acetyl Choline leading to increased mood, focus and memory formation. Stack that with Huperzine A which down regulates Acetyl Choline Deesterase, the enzyme that causes the break down of Choline in the brain for recycling, and you have increased Dopamine, increased Choline and a compound to stop the break down of that increased Choline!

Be the first to review “Grind – Primabolics” Cancel reply 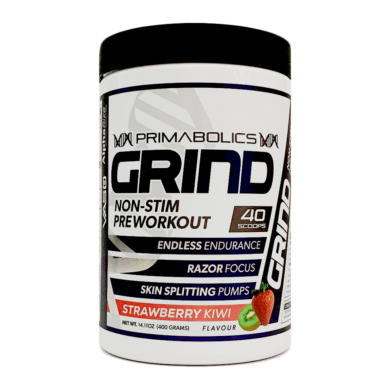