212° is a fat incinerator that incorporates 3 scorching blends of research proven ingredients enabling you to effectively get rid of unwanted body fat.

212° by Muscle Elements is a state of the art full spectrum fat incinerator that incorporates 3 scorching blends of research proven ingredients enabling you to effectively get rid of unwanted body fat. 212° has a powerful thermogenic blend that will not only give you the energy to blast through your day and your workout but it will promote lipolysis (breakdown of lipids/fats), improve mental focus, and reduce hunger.

Synephrine HCL – a stimulant that triggers neurotransmitters involved in the fight or flight response. Research has shown that synephrine is a stimulant, thermogenic and assists in appetite control*. The efficacious dosage is 20-100 mg*. 212° contains 30 mg’s per serving.

Caffeine – a central nervous and metabolic stimulant that is naturally found in coffee beans, tea and guarana. Caffeine has been shown to support energy, thermogenesis, alertness, reduce hunger and fatigue*. An efficacious amount of caffeine can vary from 50-200 mg depending on the individual*. 212° contains 175 mg’s per serving.

Black Pepper – also known as piper nigrum, contains piperine a compound responsible for the pungency in black pepper. Consumption of piperine increases the bioavailability of nutritional compounds and may reduce body fat accumulation*. The dosage of 5 mg three times daily is recommended. 212° has 5 mg’s per serving.

Juniper Berry – known as Juniperus communis is a botanical that has historical use as a spice and to treat ailments such as upset stomach*. It possesses water loss properties which can be used to reduce excessive water retention*. 212° has 50 mg’s per serving.

Dandelion Extract – known as taraxacum officinale, is a botanical that has historical usage in herbal medicine as a treatment for several ailments such as infection*. In addition, it is a potent water loss ingredient that promotes the excretion of excess water*. 212° has 50 mg’s per serving.

Uva Ursi – known as kinnikinnick, is a botanical that has been historically used for medicinal purposes because of its antimicrobial properties*. Studies have shown that uva ursi has water loss properties which can promote the removal of excess water from the body*. 212° has 50 mg’s per serving. 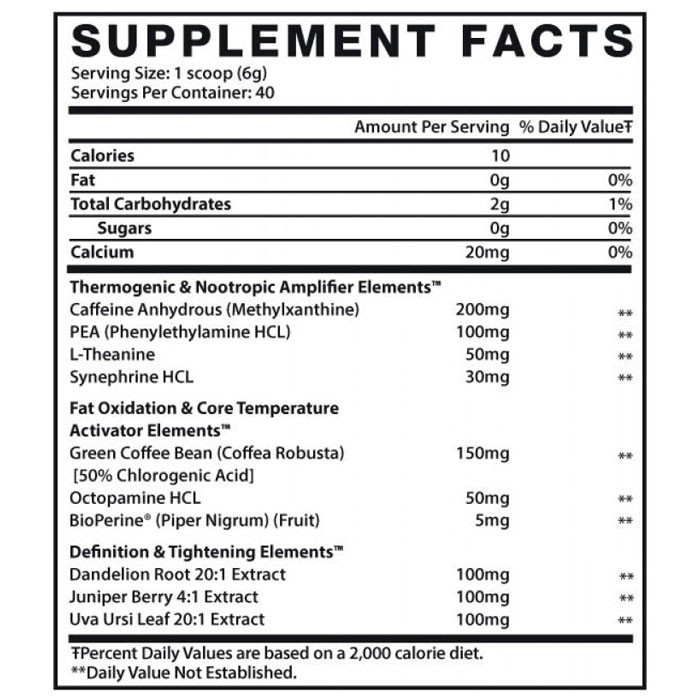 Be the first to review “212° – Muscle Elements” Cancel reply